NOTE – The following experience occurred at an actual place of business in Orem, Utah called the Appliance Exchange, however the names of the below referenced people were changed to protect the guilty. Sergio is the salesman. Julio is on phones. Brent is the boss.

With four boys living in the house it became painfully clear our single washer and dryer were not up to the task of keeping up with the mountains of jeans, t-shirts. and stinky socks being produced on a daily basis. I started looking for a reasonably priced stackable set on the KSL Classifieds.

I was not prepared for the adventure that would unfold deep within the underbelly of the used appliance industry.

Tuesday June 7, 2016
Reviewing the classifieds I quickly found several encouraging options for a stackable washer and dryer in the $500 range. I noticed some of the most promising sets were being sold by a place in Orem called the Appliance Exchange.

My intention was to just pay for them sight unseen, relying solely on the single ad picture. Risky, but whatever. They come with a “warranty” right? The pictures looked decent so I called. 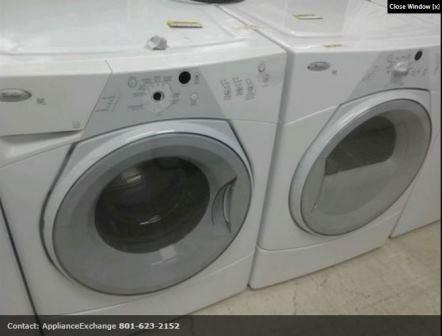 Darin: I’m interested in the washer dryer set you have in your classified ad for $500.
Julio: Which one?
Darin: The Whirpool Duet set looks pretty good.
Julio: We just sold that set.
Darin: Oh that sucks. Your ad is only an hour old. You sold it already?
Julio: We move stuff fast.

I had my doubts, but okay. If you say so, Julio.

Darin: What about the Maytag set?
Julio: We sold that too.
Darin: Wait… that ad was also only an hour old.
Julio: Like I said…
Darin: Do you have any of the sets available from your KSL ad?
Julio: I don’t think so.

What the hell? Really? If you idiots can move used appliances that fast I’m in the wrong business. These things were being scooped up faster than cocaine at a party hosted by Charlie Sheen.

Darin: Aww… I wanted to just pay you over the phone and have you deliver them.
Julio: We don’t take phone payments.
Darin: I can’t give you my credit card number?
Julio: Yeah, we take credit cards but you have to bring it in.

Yeah right. Who doesn’t jump at the chance to take a credit card payment on a phone call? This entire conversation was beginning to seem about as legitimate as a $20 million inheritance from a Nigerian prince.

I’m usually a lenient kind of guy. Maybe I misread that entire conversation. Maybe I’m jumping to conclusions. Maybe the Appliance Exchange of Orem Utah really did move that much product. Maybe I really don’t understand the complex yet lucrative business of used appliances.

Maybe their owner has a private jet and a yacht in St. Croix.

Friday June 10, 2016
I decided to head over to the Appliance Exchange. On my iPhone I pulled up their latest KSL ads. Luckily they had four new listings only 15 minutes old! This would work out perfectly. I somewhat expected to walk into a packed showroom full of rabid consumers of used appliances, and I was mildly surprised to find myself alone except for row after row of somewhat sad looking refrigerators, ranges, and washing machines. I began the search for the holy grail of a cheap but decent stackable washer and dryer.

Eventually I was met on the showroom floor by Sergio.

Darin: (Showing him the photo on my phone) I would like to buy this washer/dryer set.
Sergio: We sold that.
Darin: How in the world? This ad is only 22 minutes old.
Sergio: We move stuff fast.
Darin: Are you telling me someone came in and bought this set in the last 22 minutes since you put up this ad? That sounds unlikely, especially since I’m the only customer in this joint.
Sergio: You’d be surprised.
Darin: Does everyone who works here answer everything using the same exact words?
Sergio: I can sell you this set over here for $650 (pointing to some beat up Frigidaires).

I think I’m beginning to see their game:
1-Advertise some nice appliances at a super low price
2-When the customer comes in to get his appliances, claim they are “sold”
3-Try to sell them some other crappy units at a higher price

The classic bait and switch.

I looked around the extensive showroom again to find no other customers in sight. I got an idea.

Darin: Let’s call the number on the ad, shall we Sergio?
Sergio: That won’t be necessary.
Darin: Just the same, let’s do it anyway and see what happens.

Hearing this, Sergio slinked away leaving me alone among the rows of less than pristine electric dryers standing in motionless attention. I called the number on the ad and the Julio answered. I explained to him that Sergio told me everything on their ads was sold in 22 minutes. Julio had an answer, “Those are at our Salt Lake store.”

At this point I’m calling bullshit.

“Julio, you don’t have these units and you never did,” I say. Julio doubled down on the Salt Lake store excuse. “You guys are bait and switch artists aren’t you?” I said. At that point Julio hung up on me.

I was done. I started walking out. Just about the time I reached the exit, an older couple came in through the door. I tried to walk past them. Walk out. I really tried. But… I couldn’t. I was compelled to warn them.

Darin: Don’t buy anything from these crooks. I’m completely serious.
Grandma: Oh?
Darin: I’ve never before witnessed a bigger group of ripoff artists than these people. Complete baiter and switchers they are.
Grandpa: Thank you for letting us know. We were nervous about coming here in the first place.

Just then the manager walked in. I’ll call him Brent. “Can I help you with something?” he said. Yes Brent, you can. I related the entire story to him up to that moment, how everything on their ads seems to be immediately “sold” and how they try to get me into the store to sell me crappy appliances for jacked up prices much higher than the pristine looking sets in their pictures. Then I pointed at my phone at the now 26 minute-old ad and said “This is the set I want for $500 and I want you to honor this, BRENT.” He muttered something like “fine let’s go find them” and walked from the showroom into the monstrous warehouse in the back. I thought the showroom was big but the back warehouse seemed endless, hundreds of beaten, broken, and malfunctioning dishwashers, stoves, and washing machines. I decided this was a good time to screenshot the ad (see left).

When he walked away I took this picture. This is what he pointed to (see right). Seriously. I’m not joking.

Surreal doesn’t begin to describe this. I need a Prozac or something. Maybe a shot or five of tequila.

The thought of walking out again crossed my mind. But no. On second thought I wanted to have some fun with these guys. I wanted payback. I decided to go on the offensive. These idiots were going to have a bad day at my hands. Don’t worry, I don’t feel guilty about it. I walked up to Brent.

So I called it. With Brent standing right next to me I called it. (801) 623-2152. In a few seconds something brilliant happened. One of those amazing, chewy, satisfying, life-giving, moments that you always hope will happen but think never will…

The phone rang not 15 feet from me!

Julio: This is Appliance Exchange of Orem.
Darin: Do you have a Brent who works there? (Brent is standing next to me with his mouth open).
Julio: Why do you ask?
Darin: He wants to talk to you.

I hand Brent the phone. Into it Brent said, “Uhh… hello? Julio? How did you get on this number?”

And the Oscar goes to…

The highlight of the Brent and Julio show, the critical point of this story – they were only 15 feet from one another, so close they could hear each other speak even without being on the phone, simultaneously talking to each other in stereo, electronically and in person!

I was so excited I think I peed a little.

Julio hung up and Brent handed my phone back to me. The three of us stood there for about 15 of the most gleeful seconds of my life.

Darin: You are all s

o full of shit. You are the worst liars ever.
Brent: …
Darin: I would be upset right now if you weren’t such bad crooks. You actually made this enjoyable. I do have a suggestion for you – if you don’t actually have the goods, you shouldn’t say you have them in your classified ads. Someone other than me might get mad.
Brent: …
Darin: (Pointing at Julio then Brent) Are you “Bait” and you “Switch”?  Those are good names for you both.
Brent: We don’t even put those ads up. Someone in Seattle does it. They aren’t even in Utah.

Really Brent? Maybe someone does it from the sundeck of their yacht in St. Croix for all I know.

I walked out for real this time. The moment I got into my truck I searched for their ads again just to screenshot them.

In the few minutes it took me to leave the door of the Appliance Exchange in Orem Utah to walk to my truck, start it, pull KSL classifieds up on my phone, and search for their ads, someone had taken them all down. All of them gone in a flash. Like teenagers being asked to wash the dishes those ads immediately disappeared.

Epilogue
At the time of this writing I noticed some of their ads are back up on KSL Classifieds. They used the same photos and descriptions for used washers and dryers – that they still don’t actually have.

You have to hand it to them. They might be liars but at least they are consistent.

It has been a month since I last checked in with the Appliance Exchange of Utah. Perusing the KSL classifieds today I found these ads:

You may find some of these familiar from the ads in the above story -for good reason- they are the exact same ads, just reposted. Despite having been posted in the last week, they don’t have these appliances in their store. I know it and they know it. They didn’t have this appliances last month when I went in to find them. Probably they NEVER had them. Despite being caught redhanded in yet another bald faced lie, Appliance Exchange still puts these ads up as bait for their switch.

Today I called the Appliance Exchange and on all four of the appliance sets listed above I was told they were either “just sold” or they “are at our other store in Salt Lake.” Hilarious. There has been no individual I have ever dealt with at that organization that has told me the truth.

Let’s shake the bushes a bit.

As of today I  contacted KSL informing them these are fraudulent ads, in violation of paragraphs 7 and 15 of their terms of service. I have also made a complaint to the Utah BBB, and just for fun I sent this story to KUTV 2 Get Gephardt.

I’ll keep checking in on them every so often.

anyone is looking for decent used appliances and want to be treated fairly, we found this set at Aairco Used Appliances. She was honest and sold us exactly the product and the price she advertised. I couldn’t be happier.