Or why I couldn’t vote for Obama

[Editor’s note: This was originally written in 2008 yet somehow in 2016 still seems relevant]

Irony. The phenomenon that fuels an interesting life. The mocking miracle of paradox. Wonderful contrarianism (if that isn’t a word it should be). I want to vote for Obama and I can’t because I live in Utah. Why not you ask?

Let me start from the beginning.

It was 1974 in Milford, Utah. My mother was red through and through in the most dayglow red state in America. She didn’t know it yet since the red/blue regime designation wasn’t invented until 1980 when ABC used the label of Red=Republican, Blue=Democrat for the first time.

It was on TV so it had to be true.

My mother taught me of the wickedness of democrats and the righteousness of republicans. In 1974 the cold war was at its apex and the “evil” democrats were doing their best to convert our government to communism so we could all live in accord with Satan and his minions. The angelic Nixon had just resigned because of a subversive democratic plot to drag us down to hell. The godless Chinese who backed the North Vietnamese had 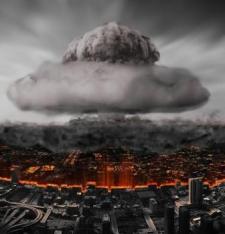 given us all we could handle in Southeast Asia and we were being forced to discontinue our righteous crusade in that part of the world. The Killing Fields of the Khmer Rouge would start soon. Terrorism raged in Northern Ireland and could be resolved if both sides would only accept the correct “gospel.” We accepted “mutually assured destruction” as a fact of life. Most thought world war was imminent and many said we’d never see the turn of the century. We were nearing the apocalypse.

The 4 horsemen were saddling up for their final ride… and democrats were to blame.

This was my foundation. I had no choice but to be red, it was my heritage. On the surface I was the perfect child. I went to church every week, got good grades, had success in sports and student government, got scholarships, went on a mission, graduated from college, got married, had kids, callings and careers. I did everything I was supposed to do. The popular kid, loved by the successful and envied by the unfortunate. Mr. Perfect. A shining star in a jacked-up world.

Perfection is it’s own demise

ld, it started to crumble. I began finding holes in the plastic bubble of my worldview. My real problem was that I was insanely curious about everything. Was it a problem or was it salvation?

During the early 90s I was a Rush Limbaugh “dittohead” yet I began question the perfection of the republican party. Reagan came and went and the turn of the century came and went. The year 2000 wasn’t supposed to ever arrive but it did anyway. Why was it here? And why were we still here? Not only that, why were we all doing pretty well? Our economy was good, communism was proven wrong, and the internet was tying the world together. Why was life good? It didn’t make sense.

American society is a worried one. If we aren’t complaining about something or creating a crisis then we can’t seem to feel normal. We have to have an enemy. It’s our nature.

See I have this theory about stress – every person is predisposed to live at a specific level of stress.

Let me give you an example. If the stress gradient runs from 1 to 10, an individual who lives at a 9 will always be at 9 even if no stressful things are happening in his life. If he has no chaos, he will create chaos for himself just to be at that level.

Alternatively, a person who lives at a 3 stress level will always be at 3 no matter what sort of problems life seems to throw at him. This type of person just rolls with it. Nothing gets him down.

Some people live with drama and some don’t. It’s human nature and we see it with people all around us.

American society is the same way.

Americans live at about an 8 stress level. If we don’t have a crisis we create one. We wag the dog. If you don’t believe this turn on Fox News sometime.

Maybe we watch too many superhero movies.

So now it’s 2008, and the easy life we had just 8 years ago is starting to corrode. Our military is occupying two middle eastern countries, the mortgage industry is in shambles, gas is $4 a gallon, and inflation is beating the hell out of everyone’s bank account. I don’t know when it happened but one day I woke up and just realized my mother was wrong. The perfection of the republican party was it’s own demise. Red states did NOT hold the moral high ground – they were no more right or wrong than the blue states. I’ve voted for every republican president up to this point, and now for the first time in my life I want to vote for the democrat.

An Associate’s Degree from the Electoral College

Satisfied with my newfound political freedom, something hit me like a ton of unopened Sean Hannity CD’s… I live in Utah! A vote for Obama does not count here – they throw it out! My whole life I’d never thought about the electoral college because it didn’t matter. It worked for me. Because of my recent change in worldview, suddenly it did matter. The electoral college was going to throw away my vote. Did it really matter that McCain will win here by 80% or by 60%? [Editor’s note: McCain ended up taking Utah in 2008 with 62%] It’s a forgone conclusion he’s going to win, and when he does he takes ALL of my state’s electoral votes.

My new political autonomy has been crushed, shattered, exploded, like a cruise missile through an Iraqi palace. So why even vote?

Irony was now mocking me.

The electoral college, an institution begun over 200 years ago partially as a concession to Southern slave owners, was now tearing up my vote.

[Side note: The founding fathers conceded power to the South by allowing their slaves to be counted in the determination of the number of electoral votes per state, even though slaves could not vote. This was done after much bellyaching by Southern politicians that the Northern states would control their lifestyle due to a higher population base in the north. Look it up if you don’t believe me.]

The only satisfaction I have is that a vote FOR McCain in Utah does not matter either. No vote really counts in the redd

est state in America. (Similarly, no votes in the bluest states really count either). The only difference is, McCain voters go to sleep at night thinking their vote will matter when in reality it didn’t make any more difference than an Obama vote. As I said, in Utah it’s already a forgone conclusion. It’s all about perception. A Utah McCain voter perceives that he is making a difference when he is not.

Until he switches sides – as I did.

It’s time to eliminate the electoral college. There really is no valid reason to keep it yet there are plenty of reasons to eliminate it. I’m just the smallest most insignificant example. But if I’m being discouraged to vote, how many other people out there in very red or very blue states feel the same way? By it’s very nature the electoral college discourages voter turnout. This alone should be enough to dispense with the whole idea. Furthermore, the fact it virtually guarantees that no 3rd party candidate can ever win a presidential election is another good reason to abolish it.

On the verge of political enlightenment I am shot down in flames. I live in Utah so my vote for president does not count. Well, not really.